Microbial testing of Cannabis detects the presence of pathogenic bacteria or fungi (Yeast and mould) that contaminate Cannabis flower and cannabis derived products as a results of production techniques or improper handling of the flower or products. Microbiological testing includes detection, enumeration, screening and identification of bacteria and fungi. We use top of the range automated enumeration technique using Tempo machine which allows for the enumeration of Enterobacteriaceae (EB), Aerobic Bacteria Count (AC), Coliform Count (CC), Yeast and mould (YM) with the sensitivity of up to 1 CFU/g or 1 CFU/ml.

Microbial Screening uses DNA to detect and identify harmful bacteria and fungi using PathogenDx. PathogenDX uses a series of nucleic acid microarray diagnostic kits that offers rapid detection (of about 8 hours) as it can analyse raw samples without need for DNA purification and quantitation of microorganisms. 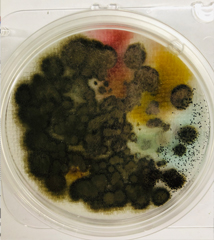 The presence of pathogenic microorganisms on Cannabis flower and its derivates may pose a serious health risk to the consumer of such products. Cannabis Flower, concentrate, crude, distillate and isolates are tested for Salmonella, E. coli and Yeast and mould of the Aspergillus species e.g. A. fumicants, A. flaus, A. niger as per the regulatory laws governing the production of cannabis and cannabis derived products.

Bacteria such as Salmonella shigella and E. coli can cause diarrhea and gastroenteritis upon ingestion of contaminated products. moulds of the Aspergillus species produce toxins called mycotoxins as secondary metabolites. Mycotoxins have adverse effects on human health upon exposure through ingestion, dermal application and inhalation of contaminated products, the adverse effects of mycotoxins include liver damage, gastrointestinal bleeding and abdominal pain, Aflatoxins have also been shown to be genotoxic, meaning they can damage DNA and cause cancer, there is evidence that prolonged exposure to Aflatoxin can cause liver cancer in humans.